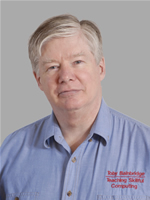 In the early 1960s I was studying Engineering at Melbourne University. As part of our course we had to spend three weeks studying Fortran (FORmula TRANslation) programming at RMIT because Melbourne University had no computers which students could use. Please remember that the earliest kit computers, sold by electronics magazines, arrived in the early 1970s, so personal computers as we know them were still decades away.

The result of this experience was my avowed aversion to anything to do with computers, to the stage that I swore that I would never use a computer ever again. I mentioned this to a client and his rejoinder was that I was not good at keeping my word!

In late 1973 I answered two newspaper advertisements for trainee computer programmers. The first job that I was offered was at Colonial Mutual Life so I took it. I started as a trainee analyst but, after some months, everybody realised that I knew nothing about computers so I was transferred to the programming section. On the Monday I was given a book, "Teach Yourself COBOL Programming" by McCracken & Garbassy, to read. This took me until lunchtime on Wednesday to read, and I then had to keep looking as though I was still reading while I felt all that I had read rearranging itself inside my brain. This process took until Thursday evening.

On Friday I started to write my first program, and I can still remember the thrill when I saw my first report come off the printer. This was a magical moment and so is the time when I really fell under the spell of these marvelous toys.

Over the years I worked in commercial programming and analysis until I started teaching in 1991, the year that Microsoft introduced Windows 3. I started my teaching career at Ringwood SkillShare (SkillShare has since been disbanded by the federal government) where I learnt just how slowly I had to move when demonstrating techniques. That time was invaluable in my learning as the people whom I taught there were kind enough to insist that I did a good job.

I moved to Maryborough, in country Victoria, in November 1997 because I had become completely frustrated with life in "The Big Smog". Since then I have become far more confident in my abilities as I have learnt more and more about both the people side and the technical side of computing. Computers exist to make people's lives easier and more productive (contrary to what many people think!) and there are so many people who are hungry to learn how to use computers this way.